Once Upon a Time Machine will be accompanying editor Andrew Carl to a few conventions this spring (and early summer), including a couple cities we’ve never visited before! See our schedule below, and follow along on social media (facebook/ twitter/ instagram) for updates:

Artist Alley Table D-11
Our two-time cover artist Farel Dalrymple will be there too, right next to us at Table D-10.
Emerald City Comic Con is the biggest comic and pop culture show in the Pacific Northwest.

Table 201
Indie, Alternative and 100% Independent, DiNK Denver is a celebration of artists, writers, creators, zine makers, graffiti artists, tattoo arts and publishers from around the world.

Come find us and say hi! 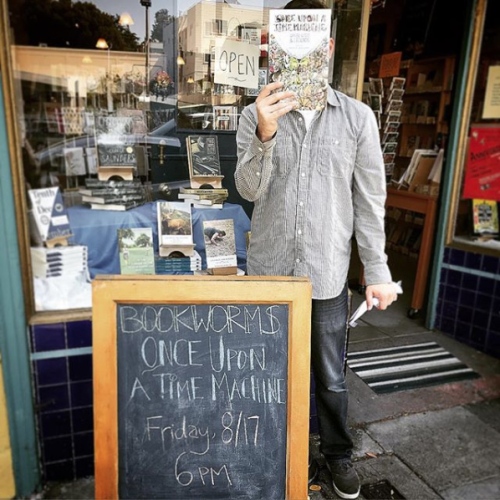 This Friday, OUATM editor & writer Andrew Carl will join Folio Books’ Bookworms Middle Reader Book Club in eating pizza, reading comics, and talking about crafting exciting new stories from the ones we all know and love. Andrew will discuss some of those unique blends of old and new found in Once Upon a Time Machine: Greek Gods & Legends, and maybe put together a few more remixes with the help of the Bookworms.

The Bookworms club (and pizza party!) for readers 8-12 gathers the third Friday of every month. There’s a $5 deposit to RSVP. If the child attends, the $5 will come back to them in the form of a store gift certificate. If they’re not able to attend or RSVP in advance, the money will be donated to Children’s Book Project, a foundation that builds literacy by providing free books to children.

On August 4, a sure-to-be-balmy Saturday afternoon in Washington, DC, a few Once Upon a Time Machine creators will be making an appearance at Fantom Comics.

Andrew Carl, DC native and Eisner & Harvey Award-winning editor/writer, is heading home to celebrate the creation and release of Once Upon a Time Machine Volume 2: Greek Gods & Legends. Artists Bizhan Khodabandeh & Alice Meichi Li will join Andrew for a signing and spirited discussion on creating the new book, adapting mythology in fresh ways, and making comics that stand out.

Once Upon a Time Machine is a Harvey-nominated anthology series (from the editors of Little Nemo: Dream Another Dream) that sees myths and fables re-imagined as science fiction comics. The newly released 2nd volume sets its sights on the Greek pantheon: Heracles, Zeus, Icarus, Athena…the gang’s all there. Creators like Ron Wimberly, Paul Pope, Andrea Tsurumi, and Toby Cypress mold new, thoughtful, and fun stories exploring the future, using some of the oldest storytelling clay we have. You can preview the book here.

Alice Meichi Li provided beautiful illustrations of Aphrodite (above) to OUATM Vol. 2 and Chang’e to Vol. 1. She is an illustrator who grew up in Yes-Actually-Detroit and currently lives in Jamaica, Queens. Her art has appeared on the pages of books by Oni Press, Archie Comics, Dark Horse, and Image Comics; and has been exhibited at the Museum of Comic and Cartoon Art, Museum of Chinese in America, Gallery Nucleus, Gallery 1988 and others.

Bizhan Khodabandeh crafted Pygmalion for OUATM Vol. 2 with writer Jason Rodriguez (of District Comics fame). He moves freely across the professional boundaries as designer, illustrator, artist, and activist. He has received numerous international and national awards for his work, including a silver medal from the Society of Illustrators for his comic work. Currently Khodabandeh teaches full-time at VCU’s Robertson School of Media & Culture and freelances under the name Mended Arrow. 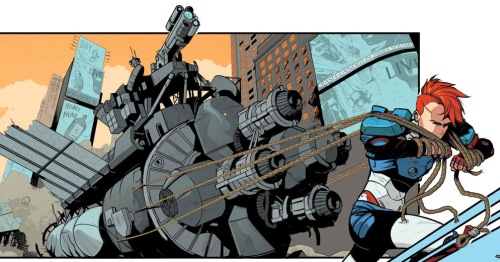 Andrew Carl edited both volumes of OUATM, and wrote some stories, too: Icarus, Daphne, and Heracles for Vol. 2, and John Henry for Vol. 1. As a kid he learned what comics were and could be in DC’s Georgetown. Andrew co-founded Locust Moon Press, where he worked with many of his heroes as editor of Little Nemo: Dream Another Dream, an audacious anthology that earned multiple Eisners and a Harvey and an invitation to speak at the Library of Congress. He now lives in San Francisco and is developing a fantasy series about anxiety, depression, dictators, and cats.

This May, we’re continuing to celebrate and spread word of Vol. 2’s release across North America.

The weekend of May 19-20, Andrew Carl (editor; writer of “Icarus”, “Daphne”, & “Heracles”) will be travelling up to Canada for VanCAF: Vancouver Comic Arts Festival. A couple other OUATM creators will be there, too: the incredible Ronald Wimberly (writer/artist, “Theseus and Metrotaurus”) and Farel Dalrymple (cover artist)! Find them all in VanCAF’s “Gym” room (tables M3, H1, & H12).

A week later, Amalgam Comics & Coffeehouse in Philadelphia will host Chris Stevens (editor; writer of “A Heavy Stone for All the Peoples”), Andrea Tsurumi (writer/artist, “Away Mission”), Mike Sgier (writer/artist, “Andromeda”), and renowned science fiction author Michael Swanwick (writer, “The Long Bow”). Rob Woods (writer/artist of Vol. 1’s “The Boy Who Cried Space Wolf”) will also be there to debut a killer new print to go with Vol. 2’s theme: Trojan War 3025. Given that Philly’s the birthplace of the OUATM series and family, expect to see a few more surprise guests show up, as well!

Once Upon a Time Machine vol. 2: Greek Gods & Legends is now on shelves in comic shops everywhere.* 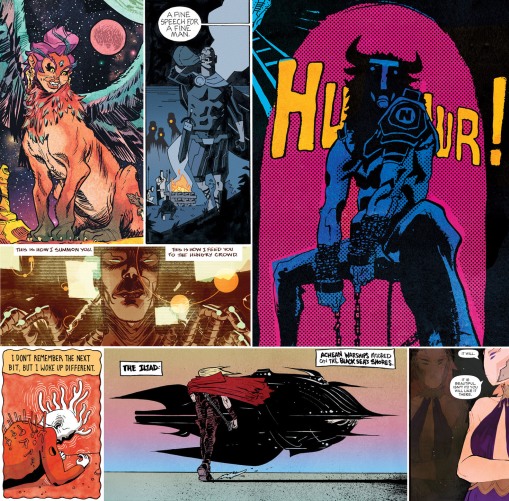 Then come see Andrew & artist Dean Stuart at Mission: Comics in San Francisco this afternoon for some signing, sketching, and celebrating.

*You won’t find Vol. 2 in regular book stores or Amazon until April 24.

Filed under Appearances, Behind the Scenes, Interviews, News

Once Upon a Time Machine Volume 2 comes to comic shops next Wednesday, April 11!

See you in the future!

“Ancient” Greece: the year 3016 AD. And 4079 AD. And 6060 AD. From the trials of Heracles to the love songs of Orpheus, the myths and gods of the past are reborn in wondrous and scarcely imaginable futures. Witness exciting new visions of the Greek tradition from the hands and minds of Ronald Wimberly (Prince of Cats), Paul Pope (Battling Boy), Toby Cypress (The Gravediggers Union), Conor McCreery (Kill Shakespeare), Andrea Tsurumi (Accident!), Hugo & Nebula Award-winning science fiction author Michael Swanwick (Stations of the Tide), and many more of today’s most inventive creators. Edited by Andrew Carl & Chris Stevens, of the Eisner & Harvey Award-winning Little Nemo: Dream Another Dream. 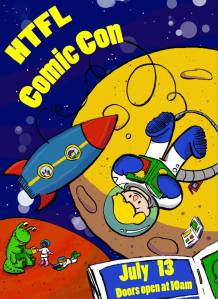 All photos in this post courtesy of Nate Prentice.

Earlier in July, we visited the Haverford Township Free Library for their first-ever Comic Con. It was a small affair, held just 20 minutes away from the Locust Moon Comics retail store/home-base. And it was loads of fun. We had a blast talking to lots of kids and their parents, sketching, participating in panels, and even helping to judge a great kids’ art contest.

The library had their own advance copy of Paul Pope’s Battling Boy on-hand, which we all took turns flipping through and drooling over. Dave was inspired to recreate some of the magic, just for kicks: 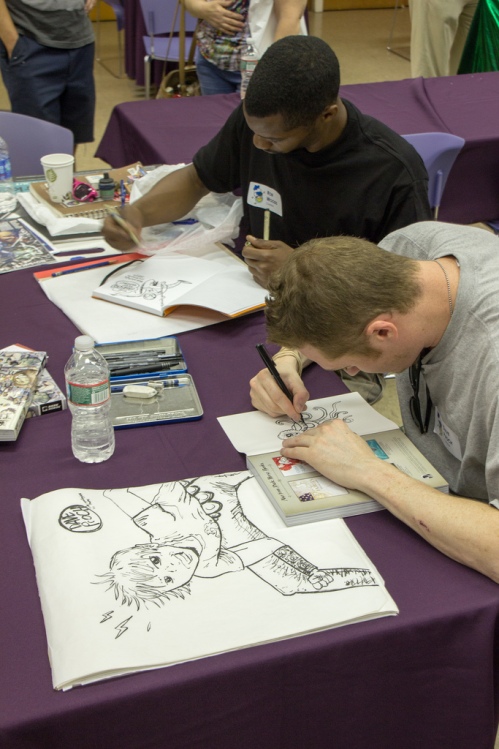 Andrew and Chris sat on a panel with Matt Phelan and Dawn Griffin to discuss the process of of “Creators Creating” — from idea to publication and everything in between.

Dave and Rob lead a “Let’s Draw!” workshop for the kids, with the help of Matt Phelan and Bob McLeod. And we’ve got video!

[youtube:http://www.youtube.com/watch?&v=nSdBc-Zvd_o%5D
We hope the Haverford Library Comic Con returns next year – because we’ll be there! 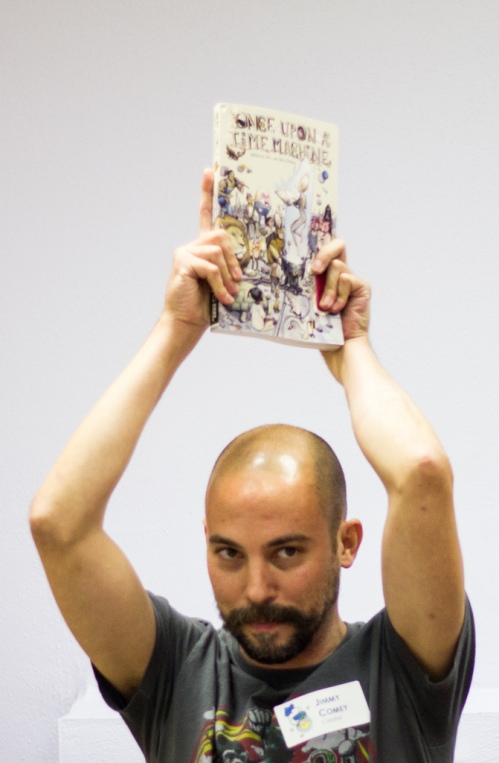 Taking this Time Machine to Toronto

We’re going north! This weekend (May 11-12), we’ll be proud to represent Once Upon a Time Machine at Canada’s most beloved comics shindig, TCAF  – The Toronto Comic Arts Festival! 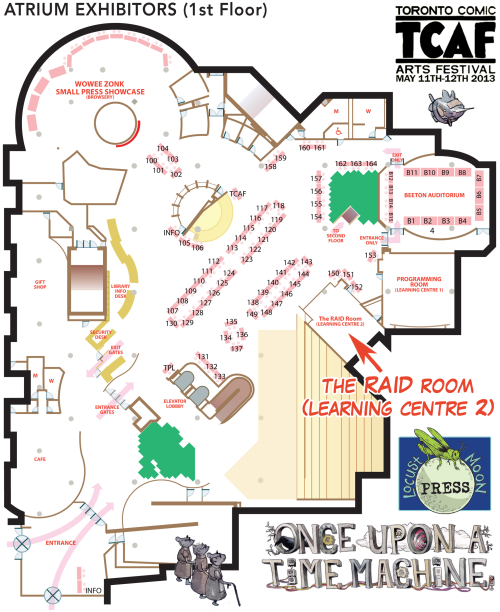 You’re also likely to find us scouring Toronto for the city’s best ramen, whenever we’re not busy at our table.

Charles Fetherolf (Giants in the Earth, Sons of Cain, District Comics, Once Upon a Time Machine’s “The Crossing”) has a table at the always-fun Museum of Comic and Cartoon Art (MoCCA) Arts Festival this weekend (Saturday April 6 & Sunday April 7, 11am-6pm). You’ll find him at Table C74, just ahead and a bit to your right as you walk in the main entrance.

All weekend!, he’ll be joined by Andrew Carl (editor of OUaTM, writer of “John Henry”) with a hefty pile of Once Upon a Time Machines to sell & sign together. 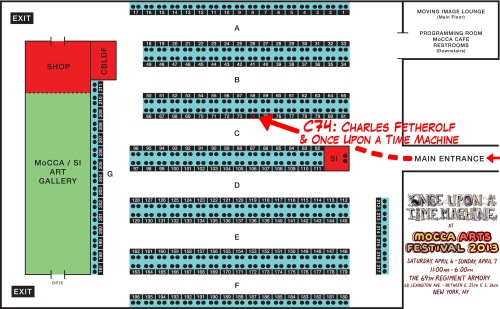 Once Upon a Time Machine
Blog at WordPress.com.
Loading Comments...